Around Britain with Flying For Freedom

A team of wounded service personnel on an epic flight around Britain.

These are the first disabled pilots to navigate the British coastline in a fleet of microlights, whilst raising awareness of the military charity, Flying for Freedom.

Trig Marketing Manager, Jon Roper caught up with the team on route at East Fortune in Scotland. He said, “Flying for Freedom aircraft are equipped with Trig radios and transponders. We are proud to support the team and celebrate their flying achievements. The flight around the UK will build valuable experience, we wish them every success on their return south and as they complete the final stages of their journey.”

Above the knee double amputee Capt. Luke Sinnott is leading this unique challenge, which has demonstrated how flying creates a sense of freedom for those with physical disabilities and will inspire other injured or wounded servicemen and women to learn to fly.

The five microlights departed from Cotswold Airport last Saturday and will fly a 2000 mile route over 14 days. Each microlight will carry two people and is being supported by a ground team travelling by road. The team plan to make over 20 stops and land at some of the UK’s most historic airfields, they aim to return to their Gloucester base on the 20th of June. 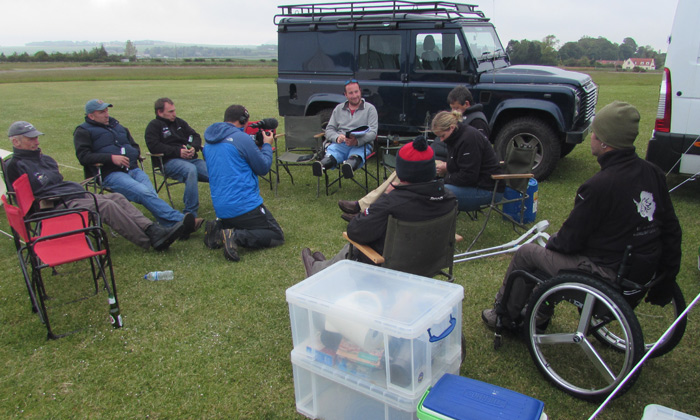 Capt. Luke Sinnott briefing team pilots on their next flight

Capt Sinnott qualified as a microlight pilot in 2014, training in Flying for Freedom’s modified flex-wing microlights. He planned the trip to highlight the importance of post-injury activities as part of a long-term recovery programme.

He said: “I lost my legs searching for IEDs in Afghanistan. Before the explosion I had been very active, playing rugby and sailing, so I needed to find something else to focus on. I had always wanted to learn to fly and Flying for Freedom gave me that opportunity.

When I fly I am free from my disability and on equal terms with able bodied pilots.

Flying for Freedom is currently supporting me to become a flying instructor so I can train future disabled and able bodied people to fly.”

The route is a true test of endurance due to the nature of the terrain the microlights will be flying over. Each pilot has overcome a life changing disability, caused by injury or sickness, to join the pilot programme funded by sponsorship through and public donations Flying for Freedom.

Flying for Freedom is partnered with Help for Heroes and supported by the Endeavour Fund, founded by the Duke and Duchess of Cambridge and Prince Harry, Airbus Military and Lord Digby Jones of Birmingham.

Lt Col (Retd) James Harris, Co-Founder and Trustee for Flying for Freedom, said: “Flying for Freedom gives people a new focus after a life changing trauma or injury.  Flying is very immersive and gives individuals used to being active a challenging outlet which is not restricted by their disability.”

The team successfully completed their challenge after 9 days, having flown over 2,000 miles around the UK.

Capt. Sinnott who planned the trip, said “I spent 6 months organising the flight and I think I under estimated the size and complexity of the task. It is too easy to forget that the United Kingdom is a big place with some very remote terrain. That said, our team of pilots showed that disability is irrelevant in the air and they braved some difficult flying, doing on average of over 300 miles in a day. That is a long time to be in a microlight, which is a very physical form of flying.”

Asked about the highlights of the trip he said: “For me personally, the high point was today. I broke away from the team and overflew RAF Odiham in Hampshire, home of the Chinook squadron that airlifted me out of the battlefield when I was blown up in Afghanistan. I decided to overfly Odiham and tipped my wings in respect. The tower knew I was overhead, so I hope they saw me. When they last flew me, it was very much touch and go that I would make it… so, it was great to show them I was not only here, but that I was also a pilot. A small gesture to thank them for saving my life, but the best part of the trip for me personally.”

John Laity, Flying for Freedom Co-Founder and Trustee said  “When we first started Flying for Freedom many people questioned that these guy’s could even qualify. The team have shown that disability is irrelevant in the air. I am really proud of the pilots and pleased they could demonstrate their ability to all those people who have donated to Flying for Freedom and supported flight training.” 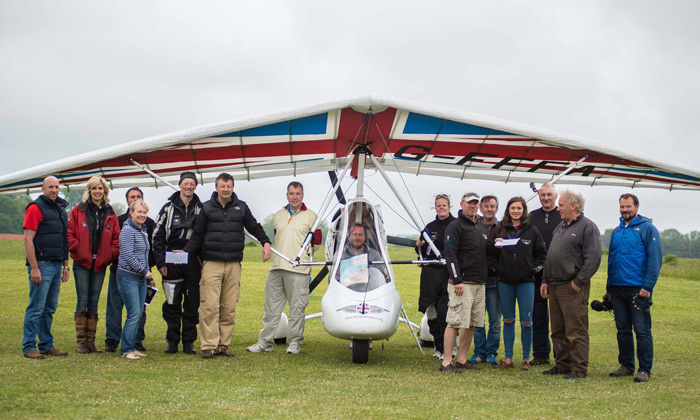